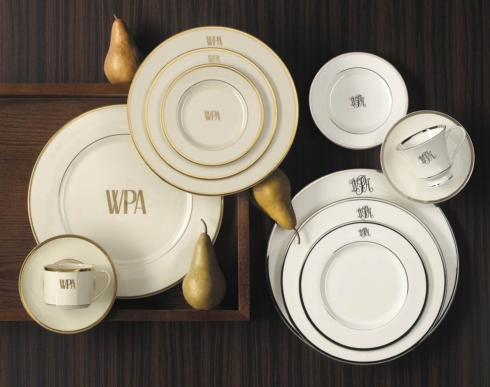 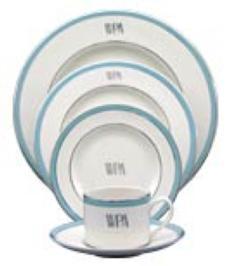 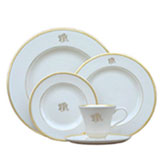 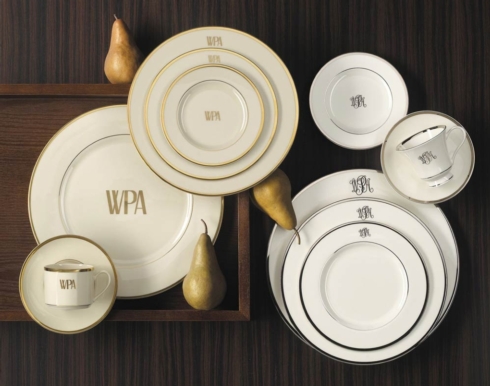 Bread and Butter no mono


Wilder's son, Austin Pickard, joined the business in the late 1920's and soon began experimentations in developing a fine china dinnerware body. He moved the company to its present Antioch, Illinois location in 1930 and seven years later introduced the warm white china with the lion trademark still used today. This beautiful china, then as now, is noted for its graceful shapes, lightness and delicacy, unusual strength and brilliant glaze.


The third generation of the family, Pete Pickard, succeeded Austin as president of the company in 1966 until his retirement in 1994. His brother-in-law, Eben Morgan, became president in January 1994, serving in this position until December 2005. The family tradition remains in place today - Mr. Morgan's son, Andrew Pickard Morgan, succeeded his father in January 2006 and serves as the company's current president, representing the 4th generation of family members to lead Pickard.


Today Pickard ranks among the finest china made anywhere in the world. The same painstaking craftsmanship and skilled handwork necessary to produce top quality ware has not changed through four generations. Each piece of china produced in the Pickard factory passes through a minimum of 21 stages and three 100% inspections, and is handled by Pickard employees averaging 18 years on the job. The Pickard factory is a rarity in that it is a small family business manufacturing high quality chinaware in an era of huge companies merging and acquiring, becoming larger than ever. Pickard's size is an advantage in today's market because of the care and attention that is paid to each piece. All patterns are decorated with 24K gold (never anything less), pure platinum and brilliant cobalt, with a style that caters to a niche of clientele looking for elegant, timeless upscale dinnerware.


In 1977, Pickard, Incorporated was selected by the U.S. Department of State to manufacture the official china service used by our embassies and other diplomatic missions around the world. The special decoration has an embossed gold border of stars and stripes, and an embossed reproduction of the Great Seal of the United States. Pickard has also been commissioned to produce custom china for Air Force One, Blair House and Camp David.


Pickard China has over the years been selected to produce exclusive fine china services for heads of state and many prestigious hotels, restaurants and corporations. The King of Saudi Arabia, Hilton, Sheraton, and Marriott hotels, General Motors, the U.S. Air Force and the Queen of England are among a few who have chosen Pickard for their finest dining.


As we move into the 21st century, Wilder Pickard would be proud that his dream is still alive and flourishing. Most recently, the company has introduced a new line of white body fine china. While Pickard continues to adapt and innovate for the future, its commitment to maintaining the quality that has made Pickard "America's Finest China" has not been compromised. This tradition is recognized and appreciated in markets around the world.

Thank you for contacting us.
We'll be reviewing this shortly.